skip to main | skip to sidebar

In the last US presidential debate Trump dissed the Canadian health care system. His stupid assumptions make me sick! In Canada, we take health care as our inalienable right. For elective procedures there can be long delays. I've had to wait for months for hip surgery and for dermatological procedures. But when I had a scuba mishap I was taken into hospital for immediate and extensive treatment over a period of three weeks. When it was discovered in a routine examination that I had arterial blockage to my heart, I was under the knife within a week for a quadruple bypass. Tthere were no delays. The costs were never even raised as a consideration. And the care was superb. Both my brothers had extensive hospital treatment which would have cost literally millions of dollars. No one ever brought up the expense. They were given first-rate treatment. If I've had to wait for non-threatneing treatment, no problem! Eventually I received excellent care. And never, not ever, were costs a consideration. For urgent treatment, immediate state-of-the-art response. No personal costs. I pay my fair share of taxes and do so cheerfully. I get great value for my investment. So, grow up, America. Health care is a right, not a privilege. I sincerely hope you are able to heal your excruciatingly embarrassing political system before it infects the rest of us who watch with a mixture of pity, anger, and heart-felt anxiety. You're better than this!
Posted by John Moss www.johnmoss.ca at 7:01 AM No comments:

Nothing to do with The Girl in a Coma

I was going to title this, "Hey, I'm back!" (I haven't blogged for a couple of years). Bev tells me this is self-evident, so just get on with it. I've been busy. I have a new YA mystery just out from The Poisoned Pencil, an imprint of Poisoned Pen Press in Arizona. It's called "The Girl in a Coma." See my website for more info (www.johnmoss.ca). It's got some American content but is mostly Canadian. Allison Briscoe, the main character, is disabled in the extreme but still manages to solve murder mysteries. In flashbacks to the ancestral past, her forebears also solve mysteries. There's lot's going in. Check it out; pass the word (or the book) on to young readers you know. Next blog, I'll fill you in on other projects in the works. It's good to be back. Cheers
Posted by John Moss www.johnmoss.ca at 8:41 AM No comments:

The Dead Scholar is the fourth in the Quin and Morgan mystery series. The first three, Still Waters, Grave Doubts, and Reluctant Dead, have been published by Dundurn Press, who will be publishing number five,"Blood Wine," in 2014.To fill in the long gap and because Dundurn won't publish a novel the length of "The Dead Scholar" (50% longer than the others), I decided to make it available as an ebook. It is an intricate "ship of fools/country house" novel that could not be cut without seriously diminishing its achievement (such as it is). The following is a description of "The Dead Scholar." Give it a try, tell all your friends, enjoy! When the corpse of an elderly professor turns up on Philosophers Walk in the heart of Toronto, fellow members of the Francis Bacon Society are not surprised he was murdered. Each of the twelve eccentrics in this unlikely group devoted to the Renaissance rogue and scholar is profoundly in the dead man’s debt, and each has reasons for wanting him dead. Detectives Miranda Quin and David Morgan are drawn into their midst as the investigation moves from the university environs to a grand summer house in Muskoka, and reaches from the turn of the new millennium back into the bleakest events of the twentieth century, and even beyond, to Elizabethan England and the sordid beginnings of a new world order. "The Dead Scholar" is a drawing room thriller and a black comedy, an exquisitely paced intellectual puzzle and a complex study of quixotic characters whose lives intersect in a web of dark secrets they cannot escape. It is a world where Quin and Morgan find themselves quite at home.
Posted by John Moss www.johnmoss.ca at 6:55 AM No comments:

Scenes of the Crime

Scenes of the Crime It’s been a week now since the annual Wolfe Island Mystery Lover’s Festival, Scene of the Crime. This was my second go at it, the first as a speaker, panelist, and honoured guest. And the guests were honoured, no question of that. In a setting that is somehow outside the normal sweep of time, where tourists and mystery buffs wander the main streets of the idyllic island village in search of ice cream cones and tales of murder, we were befriended, celebrated, and applauded by people who love books. For the writers and readers alike, it was sheer delight. The four writers featured in the readings Saturday morning were D.J. McIntosh, whose debut novel, “The Witch of Babylon,” has captured accolades and stellar sales in the historical thriller market. Dorothy read and spoke about her background research. Thomas Rendell Curran gripped the audience of close to one hundred with a background discussion and brief reading from his Eric Stride series, while Y.S. Lee offered a lovely entry into her Agency novels, set in Victorian London. Ostensibly written for the Young Adult reader, her Mary Quinn novels charm all ages (as the best YA fiction does). For my own allotted twelve minutes I read a story of grim retribution taken from a work in progress. Chair of our reading session was the charming and exacting fantasy writer, Violette Malan, who is also President of the Festival Board. Her cohort on the board, the celebrated mystery writer, Vicki Delany, chaired the afternoon panel which featured the same four writers. Five writers on a stage, each as different from one another as possibly imaginable, gave a performance that seemed to enthrall the audience. It certainly was satisfying, from my perspective in the midst of the spirited wordfest. Throughout the day, book sales were brisk, with the business end of things arranged by the hard-working folks from Novel Idea in Kingston. Like any writer, I love signing books. It makes that extra connection that offsets the hours of isolated labour exploring the possibilities of an empty page. Much as I like the affirmation of selling, I like even more that my books are going to be read. The annual Grant Allen Award, named after the British writer and Wolfe Island native, was given this year to a fiendish cluster of women from the Ottawa area, The Ladies Killing Circle. Authors of a series of anthologies with names like ‘Menopause Is Murder’ and ‘When Boomers Go Bad,’ as well as a huge range of mystery novels on their own, ranging from cosies to police procedurals, the Ladies were an absolute delight as they simultaneously thanked the Board for the honour, entertained with accounts of their history, and excoriated their perceived enemies with gleefully venomous wit. I have not read all of them but I will. Vicki Cameron, Joan Boswell, Linda Wicken, Barbara Fradkin, Sue Pike, and Mary Jane Maffini are individually lovely and gracious, and collectively they’re lethal. The organizers of the Wolfe Island Mystery Lover’s Festival include writers, the effervescent Violette Malan, the poised and stalwart Barbara Fradkin, and one of my favourite people, the estimable Vicki Delany. They also include many local people, including the Carr family, Ken Keyes, and my ‘handler’ Judy Reid, all of whom deserve the most sincere thanks from writers and readers alike, all of us bound by our love of a good mystery or two. Bev and I will be back, for sure.
Posted by John Moss www.johnmoss.ca at 7:38 AM 1 comment:

After forty rewrites, this doesn't seem much different from the first one. A little punchier, I hope.

When an elderly professor turns up dead on Philosophers Walk in the heart of Toronto, fellow members of the Bacon Society are not surprised he was murdered. Enthralled by the Renaissance rogue and scholar, Sir Francis Bacon, this unlikely band of misfits also shares a profound loathing for the dead Mephistophiles who had been their leader. They draw Detectives Miranda Quin and David Morgan into their midst as the investigation moves from the university environs to a grand summer house in Muskoka, and reaches from the new millenium back into the bleakest events of the twentieth century. The Dead Scholar is a drawing room thriller and a black comedy, an intellectual puzzle and a complex study of quixotic characters whose lives intersect in a web of dark secrets they cannot escape. It is a world where Quin and Morgan find themselves quite at home.
Posted by John Moss www.johnmoss.ca at 10:51 AM No comments:

If Don Cherry developed dementia, would anyone notice?
Posted by John Moss www.johnmoss.ca at 6:45 AM No comments: 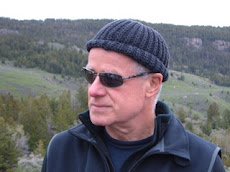